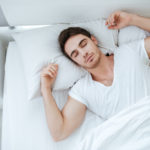 Sleep Apnea May Be Worsened By Tongue Fat

If you have obstructive sleep apnea, you might have been told by your doctor that losing weight will help clear up the dangerous sleep disorder. Obstructive sleep apnea is the most common type of sleep apnea. In fact, the sleep disorder as a whole affects an estimated 22 million Americans, with 80 percent of those cases considered obstructive or severe obstructive sleep apnea.
Obstructive sleep apnea occurs when the airway becomes obstructed during sleep as the affected person is lying flat. Obstructive sleep apnea causes snoring and, more troubling, breathing difficulties that cause the affected person to stop and restart breathing throughout the night. This in turn causes many dangerous co-morbid conditions, such as low oxygen saturation, depression, high blood pressure and can even worsen the severity of other conditions like diabetes and cancer.
Doctors have long known that losing weight can help curb the severity of and possibly even eliminate obstructive sleep apnea, but they never knew exactly why. But now a new study by the Perelman School of Medicine at the University of Pennsylvania has figured out a cause, and it might take you by surprise.
Dr. Kelley Mingus is a dentist who treats sleep apnea in his Bend, Oregon, practice. He says that, while surprising, the results of the study make sense.
“The University of Pennsylvania study found that obstructive sleep apnea has a lot to do with body fat in the tongue,” he said.
The larger the tongue, the more obstruction to the airway – and the greater the incentive to lose excess body weight, Mingus said.
“I’m sure some people don’t think about excess body fat in their tongue,” he said. “But it does occur, and it’s an important thing to think about when you suffer from sleep apnea.”
Mingus says getting on a healthy diet and adding a regular exercise routine are the best ways to lose weight, but patients should be treating their obstructive sleep apnea in the meantime.
“Don’t think that just because you’re on a diet you can just ignore your sleep apnea and hope it goes away,” Mingus said. “You are still at risk for doing your body a lot of harm.”
For patients with sleep apnea, Mingus recommends using a sleep orthotic like the ones prescribed in his clinic. He says they are safe, effective and eliminate the need for those scary-looking, uncomfortable CPAP masks.
“Sleep orthotic therapy has been found to be more effective than CPAP because people actually use their orthotics. Only about 30 to 40 percent of people utilize their CPAP machine as prescribed, which means it’s not doing anything to help you,” Mingus said.

Bottled Water for a Brighter Smile?

3 Reasons Why Chewing Gum Can Help With Oral Health