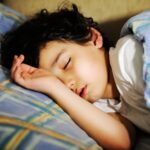 A new study conducted by the Penn State College of Medicine and funded by the National Heart, Lung and Blood Institute (NHLBI), part of the National Institutes of Health (NIH), has found children living with untreated sleep apnea have a higher risk of hypertension. The study also found that children treated for sleep apnea or who have sleep apnea that improves as they grow do not show an increased risk of high blood pressure, a significant risk factor for heart disease.

Obstructive sleep apnea, a widespread sleep breathing disorder, affects millions of adults and children worldwide. It causes those afflicted to briefly and repeatedly stop breathing while they sleep. These breathing interruptions can last just seconds or more than a minute and can happen hundreds of times a night.

The breathing interruptions associated with sleep apnea develop when the muscles in the head and neck that help keep the upper airway open collapse during sleep as the body relaxes.

In children, the most common cause for such a blockage is enlarged tonsils and adenoids, the glands located in the back of the neck and throat.

These glands can develop too large naturally or may swell as a result of illness or infection.

Obstructive childhood sleep apnea may also be caused by:

Although OSA occurs mainly in adults, some researchers estimate between 2 and 10 percent of school-aged children develop it, too.

While almost half of those affected in childhood outgrow the condition by the time they hit their teenage years, it’s a persistent and dangerous problem for the other half.

One of the largest of its kind in the pediatric population, the Penn State study stresses the seriousness of childhood sleep apnea and the critical need for early treatment – because there is no guarantee your child will outgrow OSA.

It’s also important because of the long-term impact on heart health caused by high blood pressure.

Other research has connected OSA to high blood pressure and increased risk of heart disease in adults.

Study authors recommend that children be screened, monitored and treated early in life if the signs of OSA are present to lower the chance of future cardiovascular disease.

Sleep apnea research in pediatric patients has historically focused on the behavioral effects of the disorder, such as sleepiness, hyperactivity and cognition problems. Still, data was limited on the short- and long-term impacts of the condition on the heart.

The study, published June 23 in JAMA Cardiology, consisted of 421 children between the ages of 5 and 12 years who were monitored overnight in a sleep lab.

Researchers found that 12 percent of the children in the study had OSA.

In these participants, they measured blood pressure levels, then rechecked them after eight years. The participants were then between 12 and 23, with an average age of 16.

The study results found that children whose sleep apnea persisted into adolescence were almost three times more likely to develop high blood pressure than those who never experienced OSA.

Those who developed OSA as teens and met adult diagnostic criteria for the condition were two times more likely to develop high blood pressure than their peers without sleep apnea.

Those who developed OSA as teens were also more likely to have a particular form of high blood pressure known as orthostatic hypertension, which can come on when standing up rapidly from a prone position. Orthostatic hypertension is also a primary risk factor in developing heart disease as an adult.

Two of those factors are obesity and high levels of inflammation, which can also negatively affect the heart.

Like adult cases of obstructive sleep apnea, pediatric sleep apnea can be treated in our office.

For some children, removing the tonsils and adenoids, which are often enlarged and block the airway, can help. Severe cases of OSA may require the use of a CPAP machine (continuous positive airway pressure) to help keep the airway open during sleep.

Some other steps, including changing certain behaviors or switching to a healthier lifestyle, can help if obesity is a factor.

Other consequences of OSA include metabolic syndrome, atrial fibrillation, cardiovascular disease and heart attacks. Patients with sleep apnea should seek treatment for their symptoms to find out about their risk factors and potential for health problems.

Suspect your child has sleep apnea? Does someone in your family have a history of sleep apnea, or are you showing the symptoms of sleep apnea? Call us today to find out how we can help or about our oral appliance therapy.