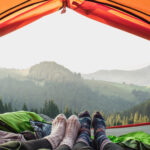 Were you recently diagnosed with temporomandibular joint disorder (TMD) and were surprised to find out that you also have sleep apnea? Or do you have the sleep breathing disorder obstructive sleep apnea and suffer from unexplained jaw pain or other symptoms of jaw disorders?

The TMD and Sleep Apnea Connection

When the flow of air is blocked, your body tries to clear the airway subconsciously (because you’re asleep!) by pushing the lower jaw forward. This can result in strain and stress on your jaw joints, which can lead to the development of TMD.

Your body also subconsciously clenches the jaw in an attempt to clear the airway, which puts extreme stress on the temporomandibular joints. This means the potential for even more damage for your jaw joints and the muscles and nerves that surround them.

But it works the other way, too. If your lower jaw is set too far back, it can contribute to sleep-disordered breathing as well.

If an individual suffers from both TMD and sleep apnea, they might exhibit the following symptoms:

Jaw Pain. The most obvious symptom of this condition is severe jaw pain. It’s usually felt at night while sleeping but may be experienced throughout the day if not treated properly. Some people with sleep apnea will wake up feeling like their jaws were locked shut all night long. Others feel soreness around the jaw area after waking up. In some cases, patients report having headaches associated with jaw pain.

Difficulty Sleeping. When someone has sleep apnea, he or she may be tired upon awakening each morning. They often complain about being unable to fall asleep again until much later in the evening. Other times, they’ll awaken several times per night due to snoring sounds.

Excessive Snoring. Another sign of sleep apnea is excessive snoring. People suffering from sleep apnea tend to breathe through their mouths rather than their noses.

Fatigue During Daytime Activities. Individuals with sleep apnea typically struggle to stay awake during the day. Their eyes appear heavy and droopy, and they seem exhausted. Sometimes, these individuals will nap during the afternoon hours.

Frequent Urination. Those who suffer from sleep apnea frequently urinate often during the night because their bodies need extra time to get rid of excess fluids. As a result, many people wake up feeling dehydrated.

Headaches. A person with sleep apnea tends to have headaches regularly. These headaches could occur in any area of the head, including behind the eye sockets, temples, forehead, neck and scalp.

Memory Loss. Many people who suffer from sleep apnea notice memory loss over time. For example, they may forget where things are kept or what was said earlier in conversation.

Depression and Anxiety. Suffering from sleep apnea can make one depressed and anxious, and increased jaw pain can cause more stress and anxiety.

Other consequences of sleep apnea include high blood pressure, heart disease, an increased risk of stroke and other serious health conditions.

Although these symptoms might not mean an individual has TMD or sleep apnea, it is beneficial to be aware of these signs and symptoms and talk to your doctor about how frequently they occur.

With proper diagnosis and treatment, individuals can find relief from the symptoms of TMD and sleep apnea. In addition to diagnosing and treating jaw pain and a sleep disorder, individuals should always discuss concerns, questions and any changes in their jaw and sleep routine to ensure effective treatments.

Some TMD treatments include:

• Orthotics: If you’re experiencing problems with teeth grinding, wearing orthotic devices such as mouth guards or splints can help reduce pressure on the temporomandibular joint.

• Physical Therapy: This type of therapy focuses on strengthening muscles that support the jaw joints. Therapists also work with patients to improve posture and correct habits that contribute to muscle strain.

• Massage Therapy: Some forms of massage can help to release tension in the soft tissues surrounding the jaw joints.

• Chiropractic Care: When someone experiences chronic pain in his or her jaw area, chiropractors may use gentle manipulation techniques to realign the spine and relieve nerve irritation caused by misalignment.

There are several different types of sleep apnea treatments available today. The most common ones include CPAP machines, oral appliances and surgery for severe cases.

We can help our patients find relief from sleep apnea and TMD. For more information on our practice and treatment options, call us today to schedule a consultation.

Get Real Relief From TMJ Disorder